The Killing Code by Ellie Marney
My rating: 4 of 5 stars

The Killing Code is a YA-Historical Mystery following Kit Sutherland, a young woman with a big secret.

The year is 1943 and the war is raging in Europe. In America, women have been recruited to aid in the war effort in a number of different ways. Kit is one of these women, hired due to her education to work as a code breaker. 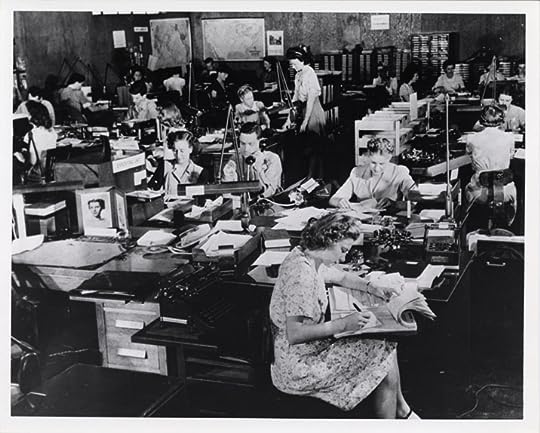 Pictured above: Code Girls working at Arlington Hall, circa 1943.

The women work and live at Arlington Hall in Virginia, a former girls’ college now serving as the site of a secret US Signals Intelligence facility.

When Kit arrives she’s full of trepidation. As noted above, she’s harboring an important secret, the revelation of which could get her into a lot of trouble. In spite of this, Kit feels her job is crucial and she throws herself into it with gusto.

Kit befriends a few of the other girls, most importantly, Dottie, Moya and Violet. Kit is comfortable, she’s happy. She feels like she belongs. She never expected it to be this way.

But then the murders start. Murders of government girls in and around D.C. This puts Kit and her friends on high alert. These killings are way too close to home.

When it appears the authorities aren’t taking the killings seriously, or if they are, they aren’t getting far, Kit and her friends decide to take matters into their own hands.

They can figure this out. They have too, or one of them very well could be next…

After being beyond impressed by None Shall Sleep, I was really excited to get more from Ellie Marney. Even though Historical Fiction isn’t generally my go-to, I knew in Marney’s hands it would be compelling.

Happy to report, I wasn’t wrong. This was so good. I loved the characters and really hope we get another book following Kit and her friends. I feel like this one set up that possibility nicely.

Kit’s character was so well-developed. From the very start, she’s intriguing. She has a solid backstory, one that could set her up for failure, but she was smart and determined. She pushed through when a lot of people would have given up.

I liked and respected that about her character, finding her easy to follow and root for. The other girls in her friend group were super likable as well, all with their own unique personalities and contributions to the group.

The mystery was solid. I did get confused at times, tracking the men they considered suspicious, but maybe that’s because I was so distracted by the dynamics going on amongst the girls.

I’m looking at you, Kit and Moya…

I was definitely satisfied with the resolution though and would love to hear news that this is actually a start to a series. That could be so fun!

I recommend this to Readers who enjoys a strong historic setting mixed with an even stronger dark mystery plot. We’re talking serial killers. Also, if you love girl groups, kicking butt and not taking no for an answer, you could really end up loving this.

Finally, while this is classified as a YA-story, I feel like Readers of all ages could enjoy this one. It didn’t really feel YA, except in the fact that the characters are late-teens, early-20s in age.

Thank you so much to the publisher, Little, Brown Books for Young Readers, for providing me with a copy to read and review. I appreciate it so much and look forward to getting more from Ellie Marney!