The Island by Adrian McKinty
My rating: 4 of 5 stars

The Island follows a newly-formed family as they go on their first big vacation together.

When Tom Baxter, a doctor, announces that he needs to travel to Australia for a work event, his new wife Heather suggests the whole family go as a way to bond and spend some quality time together.

Tom, a widower, married the much younger Heather after meeting her at a yoga studio. Needless to say, his two children, 12-year old Owen and 14-year old Olivia, are less than enthused about this new arrangement.

For the most part, the kids are downright hostile towards Heather. Regardless, Heather loves Tom and she’s willing to dig in to make this work; putting up with the children’s petty behavior all the while.

Unsurprisingly, their vacation isn’t a magic pill that suddenly transforms them into a happy family. It’s actually pretty miserable for all involved.

The kids want to see wildlife and are loudly bummed that they aren’t getting that opportunity. Thus, when a man they meet offers them a chance to explore a mostly uninhabited island full of the wildlife they’ve been looking for, Heather convinces Tom it’s a great idea.

I mean, seriously, what could go wrong?

A lot. We all know this. A lot can go wrong.

Through an exceedingly-excruciating list of bad choices and uncomfortable familial tension, the family has a bit of an accident. Ultimately ending with them having to make a terrible choice.

Either way you cut it, they’re screwed. These events leave Heather and Tom separated and Heather simply fighting to get her and the kids off the island alive.

Hold onto your butts, because this story gets violent, grimy, dehydrating and over-the-top. It’s quite fun.

The plot is interesting enough to keep you engaged the whole way through. There’s no time wasted. It’s definitely channeling Australian Horror movie vibes. In fact, I thought of Wolf Creek a lot and it was even mentioned in the story! 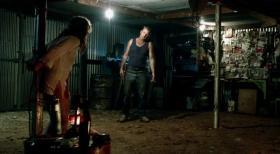 I did enjoy the main character, Heather. She was a fighter and clearly, underestimated by many. She never gave up and I can get behind that.

Initially, the characters, their dynamics and interactions turned me off completely. I found it more annoying than anything else, but I never really need to like characters in order to enjoy a story.

This one is action-packed and frankly, that’s what I was here for, the action.

The further I got into this story, the more I was able to see the positive characteristics of Heather. Even the kids started to come around for me.

Going through what they end up going through, it’s hard not to feel at least some sympathy for them. I think McKinty did provide a solid enough foundation for the characters that you are at least able to understand their choices and motivations.

I’ve ended up thinking about this book a lot more than I anticipated after I finished it. I thought it would go in my earholes and quickly out of my brain, but it hasn’t. This one has really stayed with me.

Apparently, The Island packed even more of a punch than I realized. This would make a fantastic movie, which is exactly what I thought after finishing McKinty’s The Chain.

He has easily digestible ideas that I think would translate well to the big screen. Here’s hoping.

I’m looking forward to reading more from this author in the future. I have no idea what it will be, but I have no doubt that it will be an edge-of-your-seat thrill ride!