Nothing But Blackened Teeth by Cassandra Khaw
My rating: 4 of 5 stars

Nothing But Blackened Teeth has wormed into my mind and it won’t go away. I cannot stop thinking about it!

I finished this story early this morning and have slowly raised my rating incrementally as the day has worn on. I started at 3-stars, in 12-hours, I have rounded up to 4-stars. Who knows how high this could go!?

What could be better than a long-abandoned, reportedly-haunted, Heian-era mansion as a intimate destination wedding location?

For Nadia and Faiz, nothing. Nadia has always wanted to get married in a haunted mansion and after their friend, Phillip, buys them all first class tickets to Japan, now is their chance.

The group, made up of Nadia, Faiz, Cat, our narrator, Phillip and Lin, do not all get along. In fact, I wondered frequently why they were traveling together.

Nadia and Cat hate each other, as do Lin and pretty much everyone else, except for Cat. There is tension and messy history; it’s a whole thing. As if the haunted mansion wasn’t enough, the stress of their interactions raised my heart rate.

As this is an novella, it is pretty clear right from the start that the reportedly haunted mansion, is indeed quite haunted.

This story revolves around a Ohaguro Bettari, which translated, if I am informed correctly, actually means, nothing but blackened teeth. This is a type of Yokai that I have never come across before and I found it fascinating. 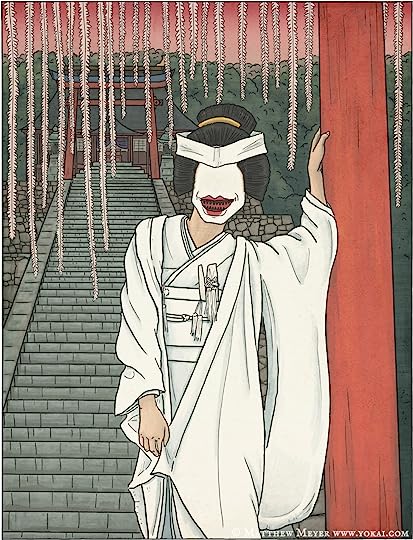 Additionally, I have really only ever read about Yokai in Japanese-inspired Fantasy stories, which of course, is generally Dark Fantasy, but reading about Yokai in the Horror genre was completely new for me. I loved that aspect.

The haunted house vibes and the way that was presented was so engaging. I couldn’t stop turning the pages. It was really well imagined.

I think my main issue with this story was the presentation; the writing style, or the narrative voice. I’m not sure which.

The writing seems so overdone. The use of ridiculously obscure vocabulary and nonstop, unnecessarily overwrought prose really rubbed me the wrong way while I was reading it.

The more I think about it though, I don’t think this was the author showing that they are the most intelligent person in the room, I think it is the personification of Cat’s character.

I could be interpreting this completely wrong, but I feel like Cat’s character, who doesn’t seem to like herself, had her intelligence as the one thing she could count out. Towards the end, as she was having one of her numerous fights with Nadia, she says how smart she is. I am smart, she exclaims.

Since the entire narrative is pretty much her inner monologue, I started to think about the story in that way, as that being her voice. Her way of seeing the world actually used those big words. That’s her crutch and it started to make sense that way.

After I had that realization, I became more forgiving about those aspects of the story that so heavily turned me off initially.

As this is a novella, there’s not a lot of build up and it did seem to end rather abruptly. As Horror novellas go, however, I would say this is a really strong one. It will definitely stick in my mind for along time to come.

Thank you so much to the publisher, Tor Nightfire, for providing me with a copy to read and review. I would definitely be interested in picking up more from Cassandra Khaw!